CdM has edge in a Battle

The Battle of the Bay is a different animal. It’s always intense, and momentum swung back and forth in a wild second half at Corona del Mar High. There was even a bit of controversy.

But in the end, as has typically been the case in this rivalry, Corona del Mar had the answer.

Junior Jensen Coop and senior co-captain Paige Nelson scored in the closing minutes as the Sea Kings rallied to beat Newport Harbor, 9-7, for their seventh straight Battle of the Bay win.

This one was closer than those in the immediate past. Newport Harbor led by a goal two different times in the second half and definitely earned the respect of CdM when it was all over.

“They’re a good team,” said CdM senior co-captain Kennedy McGuinness, who had two goals and an assist. “They were definitely tough this year. Honestly, it’s our mental game. We just pulled it together mentally. Once we get it flowing, we don’t stop, can’t stop.”

CdM (12-1), ranked No. 5 in Southern California by laxpower.com, added to a 12-match winning streak. But this one wasn’t easy. In the second half, Newport Harbor junior co-captain Katie Hendrix put the Sailors (7-6) on top.

Hendrix did a face plant in the dirt in front of the CdM goal midway through the second half, but not before finding the upper part of the net. Her third goal of the game came with 12:06 remaining, and it gave the No. 14-ranked Sailors their first lead, 6-5.

“Katie was really wrecking it out there,” Newport Harbor Coach Matt Armstrong said. “I think that probably the best testament to her performance is that late in the game, after our timeout, they started to face-guard her. There’s something to be said for that, when in the middle of the game you earn that. Yeah, she was playing really hard.”

CdM quickly tied it up on McGuinness’ second goal, assisted by CdM junior Kennedy Mulvaney. But after Newport Harbor senior defender Maxine Aiello earned a ground ball, sophomore Adena Rothbard scored her second goal on a free position shot to again give the Sailors the lead, 7-6, with 7:38 remaining.

They wouldn’t score again and the lead wouldn’t last. Mulvaney, who had come out of the game early in the first half with a right leg injury and was one of the three Sea Kings yellow-carded, scored her team-best 31st goal to knot the score at 7-7 again.

It was still tied when Coop ran in front of the goal from the left, quickly switching directions and scoring CdM’s go-ahead goal with 1:54 to play. Then came the bit of controversy.

Newport Harbor senior co-captain Rylie Siegfried won the ensuing draw, her team-best fifth of the night. She brought the ball down and collided with CdM freshman defender Joslyn Simaan in front of the goal, and the referee sent off Simaan with a yellow card with 1:25 to play.

However, he also called Siegfried for a charge. The fouls offset, and the ball went back to CdM on the alternating possession. 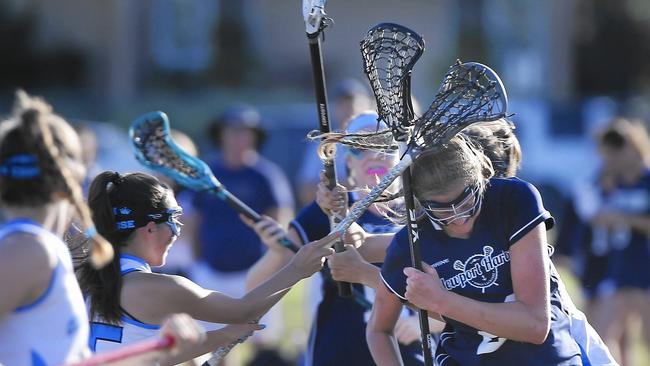 “I don’t see how you can call a charge when she got pushed so hard that the girl gets a yellow card,” Armstrong said. “To me, if you got pushed and it’s from behind, you’re probably going to run into whatever’s in front of you … I mean, I’m not going to get locked in on one reffing call. It’s a long game [but] yeah, it was an important call. I thought she was going to have a free position [shot] there and it ends up going to the other team. But like I said, it’s a long game. I don’t agree with what happened, but I’m a coach, I rarely do.”

“Even though we were down by a goal, [Friday] we worked in practice on how to defend if we had yellow cards and were a man down,” said Bethel, who also scored twice. “I think our positivity before the game and during halftime and timeouts really helped us pull through and come back.”

Partly due to yellow cards given to Mulvaney and Amdor, CdM was on defense for much of the first half. But the defense led by Simaan, Katherine Mulvaney, Lauren Kobayashi and Hailey Neumann did not give up a player-down goal. CdM sophomore goalie Ashley Olson also made six saves in the game.

Both teams will move on to important league games early next week. CdM can all but clinch its first outright Pacific Coast League title in program history with a win at Beckman on Monday at 4 p.m.

“League champions is in sight,” CdM Coach Aly Simons said. “We’ve got to show up and play … I’m just grateful that [Battle of the Bay] was a competitive match. It was fun. It’s way more fun playing a competitive game like that.”

Newport Harbor, which is 5-0 in the Century SE League, plays against 4-1 El Dorado in an important match Tuesday at 7 at Jim Scott Stadium. The Sailors are also gunning for their first outright league title in program history.

“The Battle of the Bay game is a really good marker of our progress,” Armstrong said. “There was no room for error for either team in this game, and they ended up with the last goal.”